What Are The Parts Of A Hydraulic Cylinder? 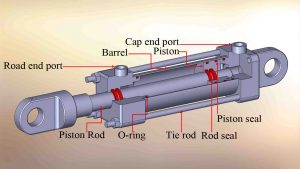 A hydraulic cylinder is a mechanical actuator that generates one-way force through one-way stroke.The term “actuator” here refers to a “mover,” or basically any part of a machine that can move or control a particular mechanism or system.Hydraulic cylinders are also called linear hydraulic motors.They have many USES, such as in various construction equipment, machinery used in manufacturing and civil engineering.They also have some domestic applications.

The cylinder barrel is the seamless chamber that ensures pressure is contained. The inner chamber of the barrel is usually has a very fine surface finish of between 4-16 microinches. This reduces friction and allows the relatively free movement of the piston as it moves upwards and downwards in the chamber.

The cylinder cap is the part of the hydraulic cylinder that keeps the pressure in. It stops pressure from getting out of the chamber during the motions of the piston. This is achieved by simply closing off one end. The cylinder cap also acts as cylinder mounting parts. These parts include the cap clevis, the cap flange and the cap trunnion. Through these, the cap can be attached to the body by welding, threading, bolting or connecting using a tie rod. For all these joinery methods apart from welding, a seal ring is required to be placed between the cap and the cylinder barrel. The size of the cylinder cap is calculated from the bending stress of the member.

The piston is the part that is attached to the piston rod which separates the two sides of pressure in the barrel. The low-pressure area and the high-pressure area should never meet, and it is the role of the piston to ensure this does not happen. The piston is usually attached to the piston rod using bolts, nuts or threads, enabling the transfer of linear motion. Normally, a piston contains groves that allow for the fitting of isometric rings. These isometric rings can either be single acting or double acting. Through the function of the piston, the cylinder can extend and contract with the reciprocating motion of the cylinder.

The piston rod is the part that connects the hydraulic cylinder to the machine component doing the work. They are connected using a machine thread or a simple mounting attachment. Piston rods are usually made of cold rolled steel that is hard chrome plated. They attach to the piston and extend to the rod end head. For double-rod end cylinders, there is a rod extending from both sides of the piston and exiting the cylinder barrel on both sides.

The seal gland has five components: the primary seal, the secondary seal, the bearing elements, the wiper and the static seals. Seal glands are placed in the cylinder to stop pressurized oil from leaking past the connection between the rod and the cylinder head. Small hydraulic cylinders usually come with seal glands that have the rod gland and the bearing elements made from one integrated part.

Seals come in many varieties performing different functions. This is why the type of seal you use depends on what you want to achieve. Some of the functions different types of seals perform include regulating cylinder speed, operating temperature, and cylinder working pressure. Some types of seals include piston seals which can be single acting or double acting, metallic seals which are made of cast iron, rod seals which are single acting, and wipers whose function is to remove contaminants like dirt, dust and moisture that can potentially damage cylinder components.

Anbao Hydraulic is a professional manufacturer in hydraulic cylinder and assembly products , we have more than 23 years experience, honed tube ,hard chrome bar, hollow chrome bar are also our hot selling products, Wish Anbao Will Be Your Next Choice.